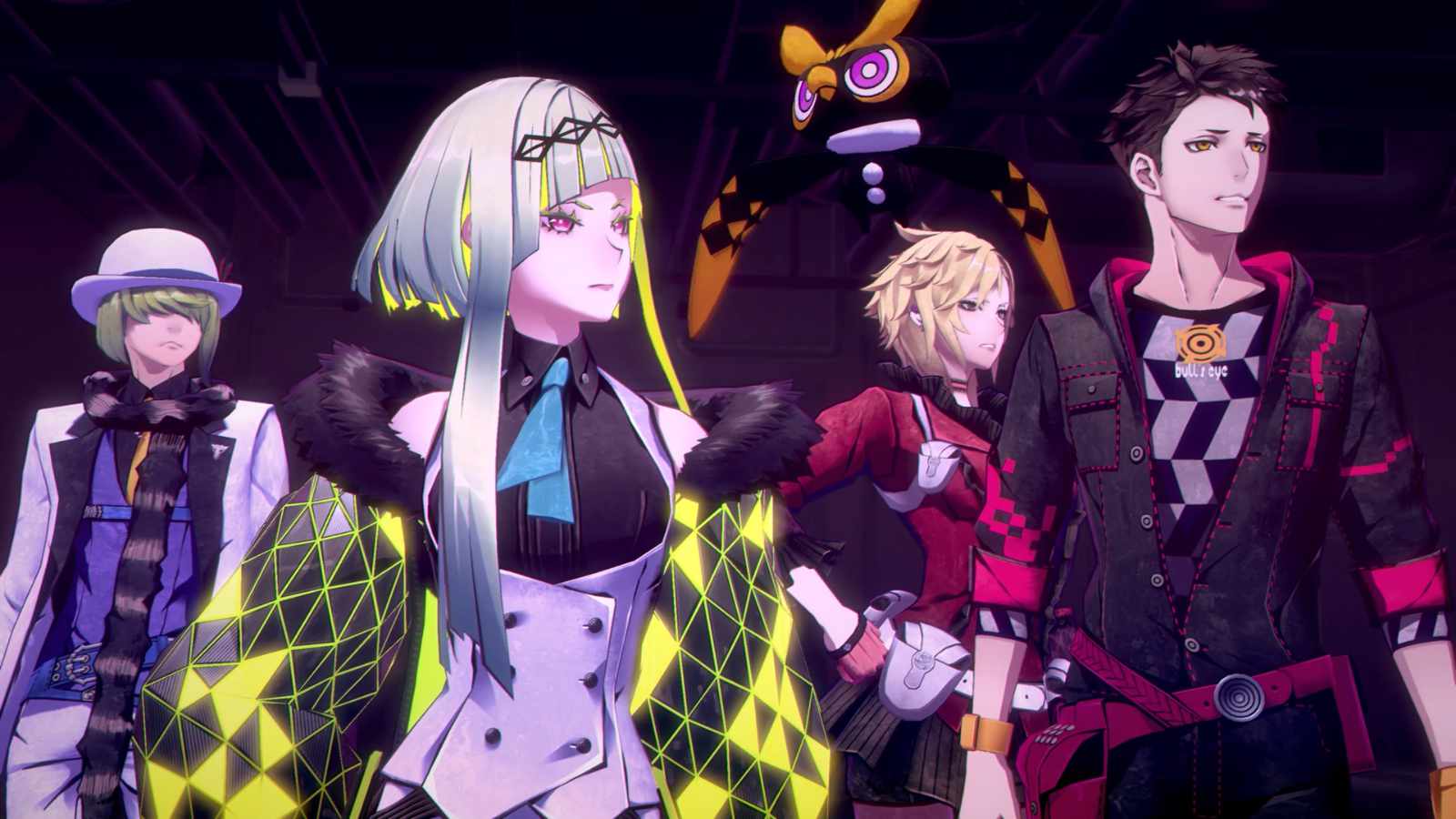 I had already talked about the game “Soul Hackers 2” in the blog. This is a JRPG from Atlus, which, like the “Persona” series, is a spin-off of the “Shin Megami Tensei” series. Its predecessor, Devil Summoner: Soul Hackers, was originally released for the Sega Saturn in 1997 in Japan. In Germany, this title first appeared in 2013 as a port for the Nintendo 3DS. Luckily, you don’t need to know the beginnings to enjoy the sequel.

Soul Hackers 2 takes a similar stance to the JRPG series I love, Persona. The new title also mixes role-playing games, visual novels, and a touch of life simulation. But the high school setting is replaced by a cyberpunk world with slight fantasy elements. On the one hand, topics such as artificial intelligence, cyberspace and advanced weapons play a role, on the other hand there are demon summoners and magic spells.

The plot is quite tricky and revolves around the artificial intelligence Aion, which foresees the impending apocalypse. To prevent them, she splits two representations of herself in physical form: Ringo and Fig. You play as Ringo whose task is to prevent the death of several people who are key characters in avoiding the end of the world. One of her skills is soul hacking: she can use it to bring the dead back to life. But this comes at a price, as it mentally connects Ringo to these people.

This trick is not only used to philosophize about what happens when two different people or their psyches suddenly come together, but it’s also a gameplay element. Thus, the other members of the team like the summoner Arrow have mental problems. If you help them solve the problem and use social events, like hanging out at a bar, to build mutual understanding, both parties will become stronger. In this context, you also fight your way through a dungeon in which each member of the team has their own section. The further you go, the more powerful you and the rest of the party can become. Anyone who’s played “Persona 5” will essentially find a modded version of Mementos here.

In general, there is more freedom and more side tasks in “Soul Hackers 2”: Many of them are fetch quests, others are nice little stories. It doesn’t come close to the “Yakuza” games, but gives you the chance to get new items and strengthen your party so you don’t bite into the granite in the main quest. Similar to “Persona 5”, you can add new demons to your collection in dungeons and also merge them after the first few hours of gameplay to get even more powerful beings as companions.

If you equip your characters with demons, they take on their strengths and weaknesses: a snowman can mistreat opponents with ice magic, but is weak against fire – and so on. Different demons inhabit each dungeon, and you quickly develop a desire to capture, combine, and empower as many monsters as possible. The right gear with these beings can be the difference between victory and defeat, especially in boss battles.

“Soul Hackers 2” does not offer an open world, but smaller areas that you control separately via a city map – similar to “Persona 5”. This time, however, no days are counted down in the calendar. Despite the coming apocalypse, it sometimes creates a rather playful atmosphere, such as when you’re delivering love letters to a bouncer or Ringo and Co. eat together in their lodging to discuss their stat boots.

Screenshots and videos already show you that “Soul Hackers 2” fully embraces its anime aesthetic. As a result, developers often mix in a healthy dose of humor. Events never get too dreary, despite some dark and surprisingly gory elements. I played this game on the PlayStation 5, which has two modes: In resolution mode, the game runs in 4K at 30 fps. Performance mode shoots 60 fps, but lowers the resolution noticeably – I’m guessing 1440p dynamic. Here you have the choice whether image quality or a high frame rate is important to you.

Otherwise, the graphics are more typical of PS4 games and are clearly rooted in the latest console generation. The environments are quite poor in detail and the enemies are not overflowing with polygons either. The art design is very consistent. In addition, the soundtrack is remarkable and mixes orchestral sounds, electro beats and fiery rock. The English voice acting is also of a very high standard and is always very moving and appropriate. There are no German speakers, but you can turn on German subtitles.

You know it from Atlus: you can spend several hours with “Soul Hackers 2”, depending on how deep you dive into the side stories, collecting different monsters and Co. The many gear options you can equip your characters with, depending on which values ​​you find particularly important, are also “old school”.

I almost didn’t mention it: the fights are turn-based, like in “Persona 5”. So there is no quick action, instead you must explore opponents’ weaknesses and tactically coordinate attacks, buffs and de-buffs as well as defense and item usage. I still love this variety of JRPG, but it might put off more impatient souls.

Similar to the “Persona” series mentioned here again and again, “Soul Hackers 2” is more than the sum of its parts. The thrilling yet playful story, lovable characters, and gameplay with depth along with the catchy soundtrack ensure that this title feels like a cyberpunk anime to play. By the way, the Japanese aren’t very interested in western political correctness and wouldn’t really fit into this sci-fi/fantasy world. So it can also be a refreshing escape from reality.

My advice: if you are interested in anime or JRPGs, especially if you also like the “Persona” series, then take a look at “Soul Hackers 2”. The completely Japanese game is a lot of fun for me and with some philosophical approaches and twists, it even makes you think once in a while. Soul Hackers 2 will be released on August 26, 2022 on PS4 and PS5, Xbox One and Xbox Series X|S as well as PC.

The supply of free current accounts is decreasing

Have you ever been ridiculed for your gambling hobby?