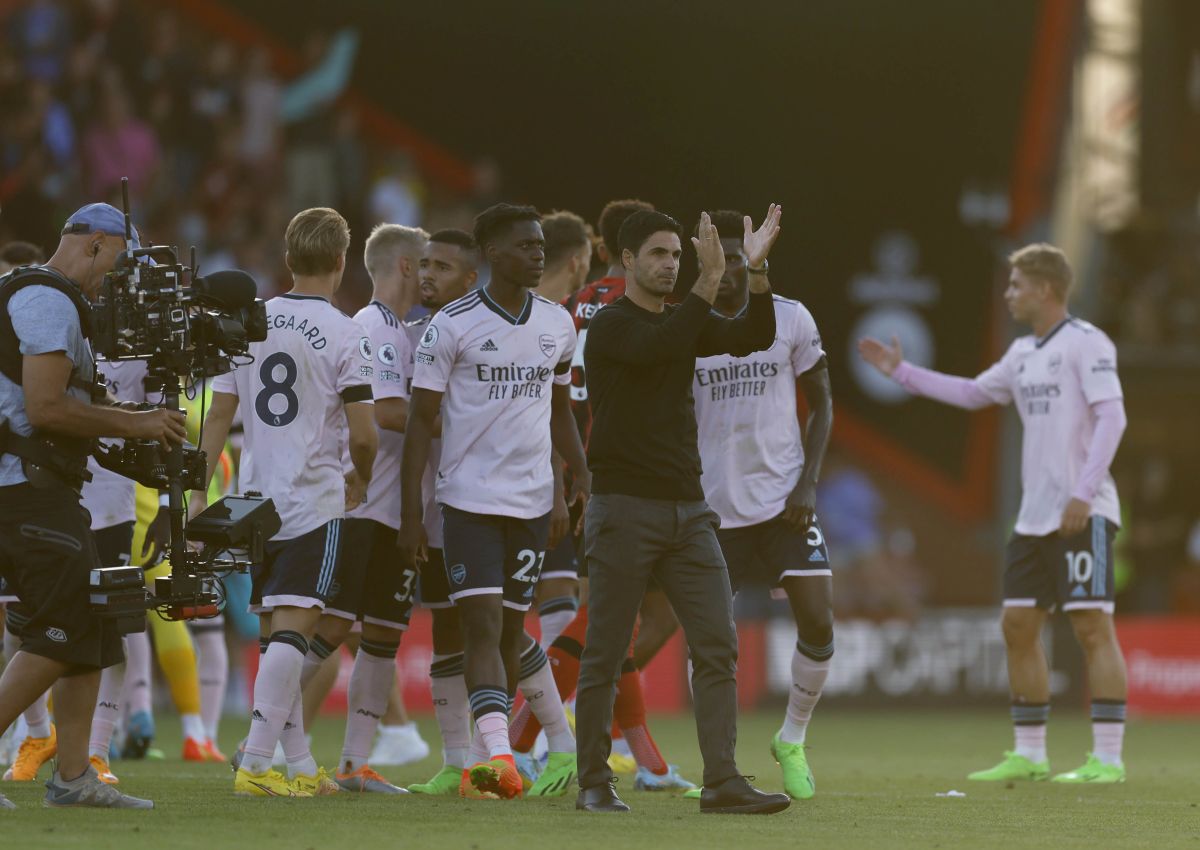 Mikel Arteta isn’t getting carried away despite his Arsenal side rising to the top of the Premier League after a comfortable win at Bournemouth.

The Gunners continued a perfect start to the campaign with a 3-0 win at the South Coast as an early brace from Martin Odegaard and a fine Arsenal opener from William Saliba made it nine from nine.

At this stage of last season, Arteta was facing calls to be knocked out as Arsenal boss as they sat bottom without a point or a goal.

But despite the turnaround, the Spaniard is keen to keep his feet on the ground and not let the winning start lead to complacency.

“It’s only three games, that doesn’t mean anything,” he said of being top of the table.

“But it’s about Monday and improving in other things that we have to do better and focus on Fulham.”

Summer signing Gabriel Jesus did much to herald such a turnaround in fortunes and, although he didn’t add to his goalscoring tally on the south coast, the Brazilian striker was once again instrumental.

He was heavily involved in Odegaard’s first game, claiming the assist for the second and then having his own goal ruled out by VAR for a tight offside.

Asked what Jesus, who finished the game with the captain’s armband, has brought to the club since joining from Manchester City, Arteta added: “A new confidence, a spark and that winning mentality that he has and the how he competes for every ball and how he transmits his energy and quality to the rest of the team.

“You can see it in the way he was involved today. He didn’t score, he got a goal disallowed unfortunately but he was in every action.

For newly-promoted Bournemouth, their Matchday 1 win over Aston Villa feels like a long time ago after heavy defeats to Manchester City and now Arsenal.

They face a tough trip to Liverpool next week after a Carabao Cup second round draw at Norwich, and manager Scott Parker was unhappy with his players’ first-half performance.

“The quality of what we played today was clear to everyone,” he said.

“I was really disappointed with the first half, we showed a real lack of humility on our part.

“We were easily let down and why we were never able to get a foothold in the game and cause or cause problems for Arsenal, our general behavior was poor.

“There was a difference today, a big difference, we faced Man City, arguably one of the best teams in Europe, Arsenal today, huge quality, so there’s no shame to lose, but certainly today in the first half they weren’t a team I wanted to see in that sense.

Jurgen Klopp: Liverpool should get points if Man Utd protests cause postponement