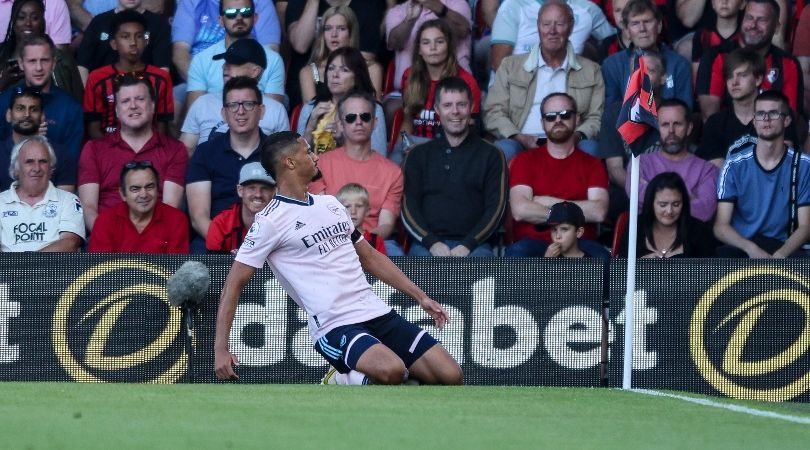 Arsenal centre-back William Saliba scored a superb goal for the Gunners in their 3-0 win at Bournemouth on Saturday – and team-mate Oleksandr Zinchenko couldn’t believe his eyes.

Saliba, back at Arsenal after three spells in France, curled a superb left-footed shot into the top corner from the edge of the box after a pass from Granit Xhaka to put Mikel Arteta’s side 3-0 at Vitality Stadium nine minutes into the second half.

Zinchenko, who was directly behind Saliba when the Frenchman kicked the ball, put his hands on his head and fell to his knees in utter disbelief.

SALIBA IS 𝐒𝐓𝐔𝐍𝐍𝐈𝐍𝐆🤯 This Zinchenko reaction is every Arsenal fan 😅 pic.twitter.com/y4sJLv9OWyAugust 20, 2022

Arsenal had gone two goals ahead in 11 minutes thanks to two goals from Martin Odegaard, the first following an impressive run from Gabriel Jesus and the second following an assist from the Brazilian.

But Saliba’s strike was the pick of the pack and Arsenal’s Twitter account also reacted to the Frenchman’s fantastic effort.

“When your centre-back puts it on top,” they tweeted alongside a photo that also showed Zinchecko’s reaction.

When your central defender puts it top bins 🗑 #BOUARS pic.twitter.com/JRNLL7Hq9VAugust 20, 2022

Arsenal lost their first Premier League games last season but have now won their first three games this time around and sit at the top of the table after beating Bournemouth.