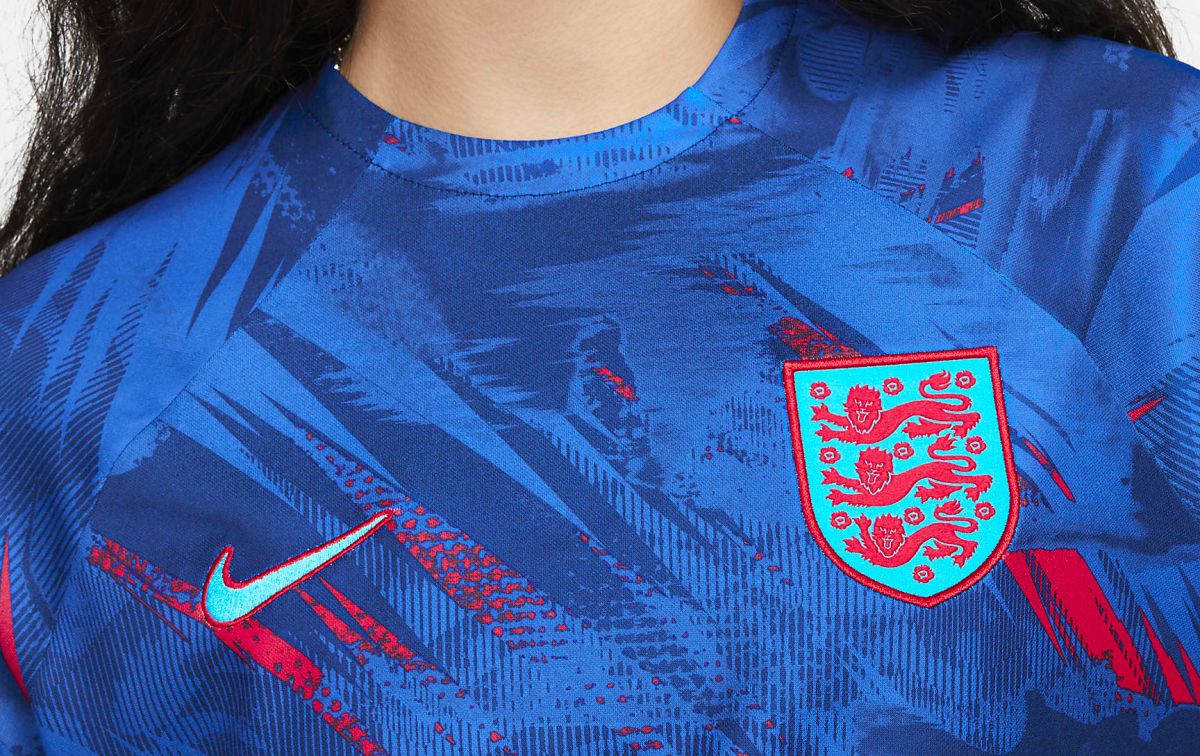 The Nike England 2022 World Cup anthem shirt and jacket have been dropped ahead of September’s Nations League friendlies.

England’s home shirt and away shirt have been released together as the last two Nike kits to be released for the tournament. With most of the 2022 World Cup kits now available, England has sparked a lot of discussion among fans, with the red stripe change in particular a huge hit.

Now the full pre-game kit has been unveiled, with an anthem jacket, pre-game shirt, hoodie and joggers to enjoy.

Both shirts take a lot of inspiration from past kits, as Nike look to reinvent the look of the Three Lions for the tournament in Qatar.

The home kit takes the dark blue and sky blue, the two tertiary colors of the Euro 96 top, while creating something radically different with the gradients on the sleeves of the top. The away jersey, meanwhile, is inspired by the 1990 away strip, mirroring that original’s collar, cuffs and colourway.

A louder blue alternative to the two World Cup shirts

Monniker ‘3 Lions’ on the neck

The motif does not feel specifically linked to England

Pre-game shirts can often be more popular than the shirts themselves. In 2018, the England team warmed up by donning a Nike top which had a geometric pattern based on the 1982 Admiral shirts – and it turned out to be one of the best-selling England shirts of all. time.

This time the pre-match top is stronger but less eye-catching. This one isn’t a nod to Lions lore, but features an intricate splatter pattern in royal blue, dark blue, and red. If you liked the Euro 2020 away kit and are sad that England have reverted to a red change strip, this is the shirt especially for you.

The Three Lions will sing God Save The King dressed in light blue, for a change

Monniker ‘3 Lions’ on the neck

The blues of the base and the escutcheon clash a little

Last time out, the England Anthem jacket was a stunning navy blue, with the badge’s lion design – which was lightly printed on the royal blue away shirt – as part of a block in the middle of Jacket. This one is much brighter.

The away shirt’s ‘3 Lions’ logo appears on the back neck of the away shirt, while the jacket itself matches perfectly with either the home or away shirt. All Nike jackets follow this pattern.

Sky blue is a real hallmark of this collection, with the border of this hoodie the bright feature

The dark blue color is lovely

The V pattern on the front looks great

The sky blue trim is gorgeous

Picture the scene: England have reached the World Cup final and a few hours before the match, a group of Lions enter the pitch to observe the scene, take pictures and drink the occasion. Gary Lineker remarks that they sound “remarkably composed”.

You pictured them in this hoodie, right? While it’s unlikely anyone in Qatar will wear anything over a shirt in this sweltering heat, this is the hoodie for such an occasion. Maybe one to wear at the pub in the freezing cold of Blighty.

What’s a hoodie without the joggers to go with it?

Minimal and perfect to wear anywhere

The dark blue hoodie is gorgeous – so here are the joggers to match. While a lot of Nike products in England are unnecessarily busy in terms of design, they knocked it out of the park with a minimal look for these.

Considering this is a winter World Cup, don’t be surprised if these sell as well if not better than the shorts…

What are pre-match shirts?

Pre-match shirts are worn by players doing a final warm-up before the start of the match.

In recent years these tops have become increasingly popular, with kit makers producing more garish and daring designs for teams’ pre-match shirts, without the pressure of having to sell as many as replicas of jerseys.

What is an anthem jacket?

An anthem jacket is worn by a team on the pitch and during anthems which are played before kick-off.

These days, most teams take to the pitch wearing jackets, as the phenomenon has become more common in modern and international club football.

How long have Nike been making England shirts?

Nike entered into a partnership with the FA in 2012. The American brand is the kit supplier for all 24 Club of England football teams, including men’s, women’s, futsal, disability and amateur teams.

The company also sponsors St. George’s Park and is a supporting partner of Wembley Stadium and the FA Cup.

Does Nike manufacture all England merchandise?

Nike manufactures all kits, clothing and equipment for the England team. Any England shirt that is not produced with the Swoosh logo is not official.