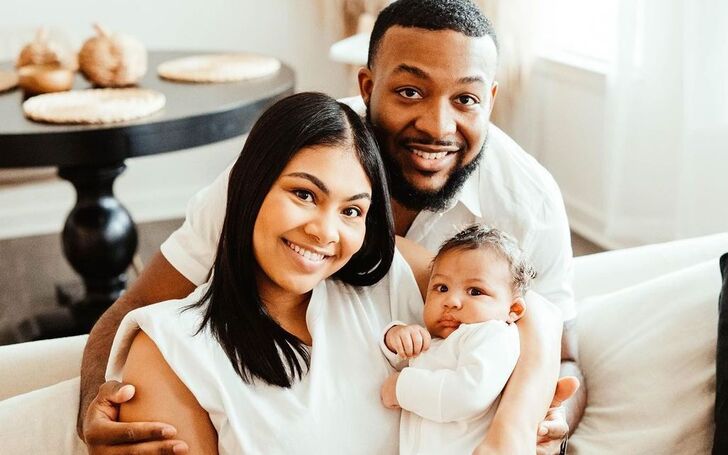 Well, isn’t it true that fate brings together people who were meant to be together?

You don’t get everything from God. But, it is said that God gives us the person with whom we should spend the rest of our life.

There is a saying that when two people are meant to be together, they will eventually find their way to be with each other. Well, I guess that’s true too.

Let’s talk today about Keeslon Fontenot and Bri Babineaux. The two lovers unexpectedly met at the most unexpected time and fell in love.

So, learning about the journey of Keeslon Fontenot and Bri Babineaux, let us divulge more about their relationship timeline including their personal facts, marital life and many more in the article below.

How did they meet?

Before getting married, they had already met and become close friends. To be exact, they grew up in the same place and have a common hometown.

Despite attending the same church as children, Briana had never thought of him as a possible romantic partner. Their story began by saying prayers one day. They’ve grown closer, it seems, after a day of engaging in a conversation unlike anything else.

They both gradually developed feelings for each other over time and mutually decided to be a couple.

Why did the couple decide to get married so early?

When the right person comes into life, everything goes very well. There is nothing to wait for when the time is right.

Bri said while posting her photo with her husband Keeslon: “It’s hard to be able to love and be vulnerable again after a breakup, but I appreciate how simple you made it. I can’t wait to be friends with my best friend forever.

Gospel singer Briana Babineaux is married to Keeslon Fontenot, a handsome man. Keeslon is an engineer and comes from the same area where Bri grew up.

The wedding took place on September 15, 2018. The couple, who previously announced their engagement, enjoyed a beautiful outdoor ceremony at Lafayette, Louisiana’s City Club at the River Ranch. In her signature Hayley Paige wedding dress, Bri radiated the beauty of a queen.

The romantic couple spent their honeymoon in Cozumel, Mexico after their wedding.

How is their life as a couple going?

The couple are living a very happy married life as a loving couple. They seem to be very happy and satisfied with their marriage.

Brii identifies herself as Briana Fontenot on her social media pages and is often called Ms. Fontenot. The reflection of love and devotion to her husband can be seen in this.

She got married at Lafayette, Louisiana’s City Club at the River Ranch in September 2018. The couple then couldn’t be physically together for the majority of 2021 as they were expecting their first child.

Bri and Keeslon used video calls to communicate as they searched for ways to connect, but that wasn’t enough to fill the void.

The beautiful couple are the parents of a cute young child. Eli Arias Fontenot is their child’s name and he looks incredibly adorable in the photos. His parents Briana and Keeslon often post photos lovingly posing with him.

At this time, the three family members coexist happily.

Did Keeslon have any affairs before his relationship with Bri?

Keeslon Fontenot’s name only came into the limelight after his involvement with his current wife Briana Babineaux.

Respectively, his life before this is not specifically known. Similarly, Keeslon’s background, relationship history and past life are not known at present.

That’s why there is no specific information regarding Keeslon before his romance with Bri is clear at this time.

Bri was engaged to Bryan Wilson before

At that time, God sent Keeslon to the performer just as she was going through a heartbreaking breakup with fellow Gospel musician Bryan Wilson.

Briana was in a serious, long-standing relationship with her fellow artist. They both worked in the same field and their fans loved them so much. She dated musician Bryan Wilson. They separated because of a private issue. Bri was completely saddened at the moment by the failure of the relationship.

Significantly, when she met Keeslon, her current husband, while recovering from the devastating split from Bryan. They grew closer and eventually gave their relationship an official name as husband and wife.

The couple are parents to a beautiful baby boy Eli:

Becoming a parent and welcoming your own child into the world is a very sacred and precious moment in the life of every person.

New parents, Bri and her husband Keeslon seem delighted with the birth of their son. Likewise, they benefit from the new experience of being new parents.

Although Keeslon still seems to be busy with his job and living overseas, away from his family for the most part, he was there with Bri when Eli was born.

The birth of a baby in the family comes with huge responsibilities. No one can really prepare for this until they actually experience it.

The same thing happened with Briana too. She had to take care of her newborn baby while fulfilling the duties of a wife. As a result, she found it very difficult to focus on her career.

Even after having a healthy boy, the challenges and growing pains in Briana’s life persisted. Bri found it difficult to stay put for a long period of time because she was used to being engaged, active and singing the gospel.

She expressed that motherhood is a very difficult journey. Likewise, she paid tribute to all the mothers for addressing their respective journeys and being strong.

Briana understands the difficult nature of parenthood due to emotional and difficult times like this. But, at the same time, the moments with the baby can never be rekindled and that’s why she happily enjoys her motherhood as much as she can.

Bri and Keeslon’s relationship after marriage:

Keeslon is an engineer and works overseas in the oil company. He seems to live away from his wife and child most of the time. As a result, he cannot help Bri with her daily challenges with the newborn.

Staying away from family must be difficult for him too. But, the couple are so in love with each other, and love always finds a way to be together, we all know that.

Despite the distance that separates them, they strengthen their bond, even more, day by day.

Love, honesty and respect are the things that fuel a relationship to grow healthily. Although Keeslon misses the most important family moments and moments with her only son, the family often tries to connect virtually with phone calls and video calls.

The couple believe that the strength of a relationship is not determined by the initial amount of affection shared, but rather by how well that love is maintained over time.

So, this is the love story of Keeslon Fontenot and Bri Babineux, from being a couple to being husband and wife and gradually becoming parents.

We hope you enjoyed it.

Why Heather Mcmahan chose to become an actress