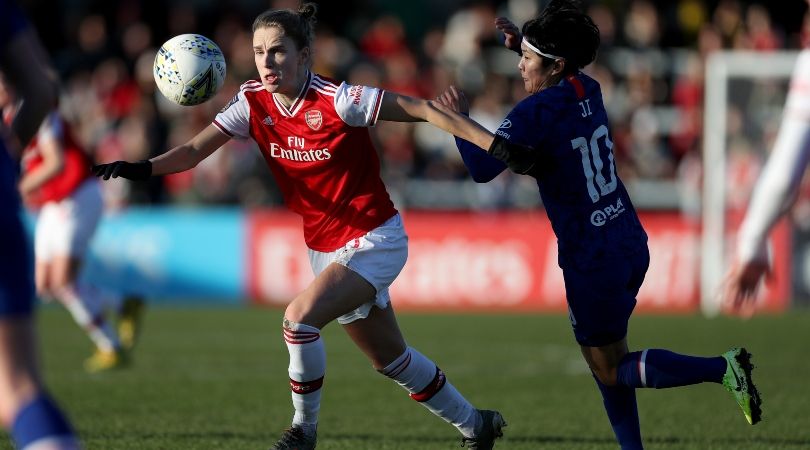 She also holds goalscoring records for most goals in a season (22 in 2017-18), most hat-tricks (five) and most goals scored in a single game (six against Bristol City in 2019) .

At times last year, it looked like Miedema might be ready to leave Arsenal, but she signed a new contract ahead of the 2022-23 season, so it doesn’t look like she’ll be losing her top spot any time soon.

Ellen White has announced her retirement from football after winning the Euro 2022 trophy with England in the summer. The striker, and second top scorer in the Women’s Super League, had scored in all but one of the competition’s seasons for Arsenal, Notts County, Birmingham City and Manchester City. Only Lucy Staniforth has scored for more different teams than Ellen White. White’s signature ‘glasses’ celebration has made her one of the league’s most distinctive goalscorers.

It hasn’t always been easy for Beth England at Chelsea with the arrival of Sam Kerr at the start of 2020 relegating her to second-choice striker status at the club. But there is no doubt that she is an exceptional goalscorer.

A first loan spell at Liverpool after joining the club proved that when she scored 10 goals to help the club finish sixth. Her 14 goals in 15 games in 2019-20 helped Chelsea win the league that year and saw her voted WSL Player of the Year.

Only Vivianne Miedema has scored at a faster rate than Fran Kirby in the top five of the WSL’s all-time goalscorers list. Kirby has often had her time on the field disrupted by injury and illness, but when she’s fit and shooting, there’s no doubt she’s one of the most accomplished offensive players in the league.

Her standout season came in 2020-21, where she struck a successful partnership with Sam Kerr to score 16 times in 18 games, the first time she hit double digits in a single season.

Beth Mead hasn’t always been the top scorer, but the last year has totally transformed her as a player. From being left out of the UK squad for the 2021 Olympics, to being named Player of the Tournament and winning the Golden Boot as part of England’s successful Euro campaign 2022, the Arsenal winger experienced a turnaround.

She reached double the goals scored in the 2021-22 season for the first time since scoring 12 at Sunderland’s 20 in 2015-16. Right now, it looks like Mead is only getting better.

What is the average Women’s Super League attendance?

Women’s Super League past winners: Who has won the league before?