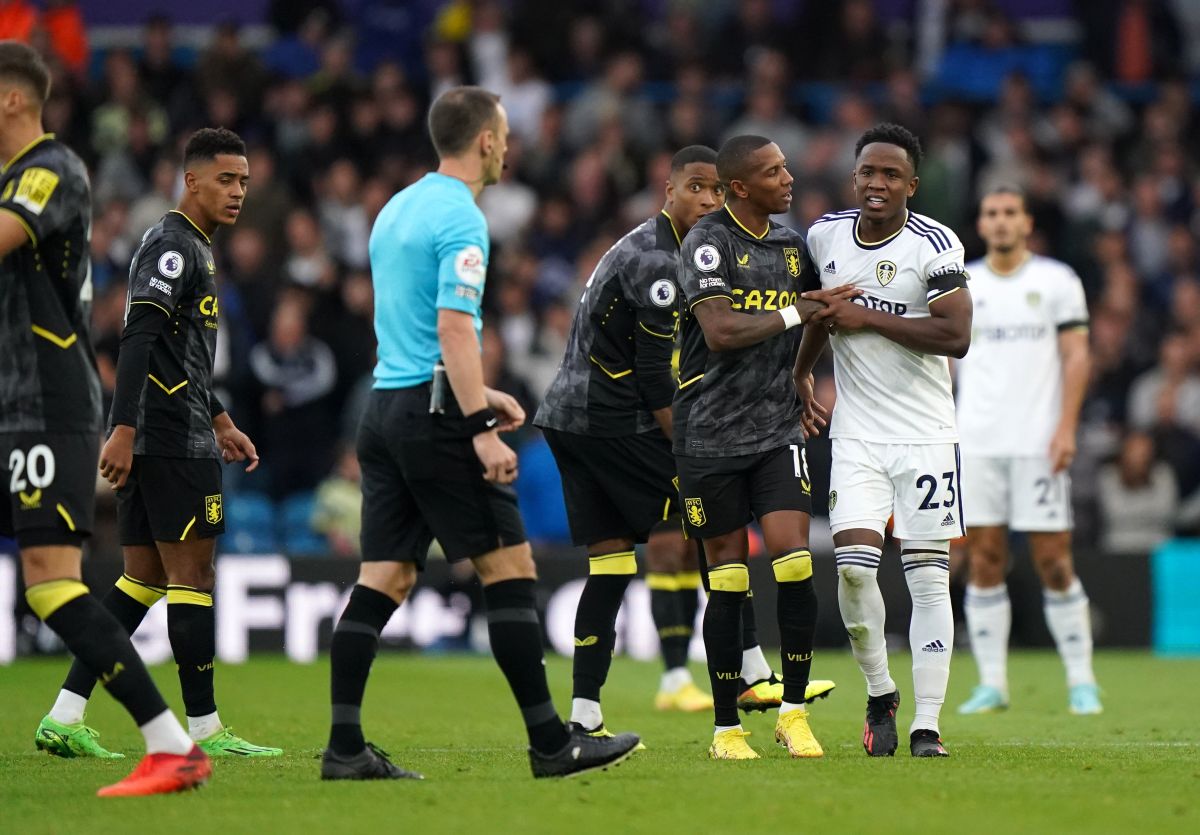 Leeds held on for a point after Luis Sinisterra was controversially sent off at Elland Road in a moody goalless draw against Aston Villa.

Colombia winger Sinisterra was dismissed early in the second half after failing to come off a free kick and picking up a second yellow card.

Villa created the best chances after Leeds fell to 10 men and closed in on a winner when Phillippe Coutinho’s volley hit a post and Ollie Watkins headed the rebound wide.

But the match was dominated by both teams’ insistence on winning the physical battle, with referee Stuart Attwell booking six more players as he struggled to maintain control.

Leeds boss Jesse Marsch watched from the gantry after he was sacked in his side’s last game at Brentford four weeks ago.

The American will have approved his players’ commitment, but both sides have come too close to the line and he will have bristled in the way of Sinistera’s unnecessary dismissal.

Sinisterra, Marc Roca and Rodrigo were all cautioned by Atwell, along with Villa debutant Ludwig Augustinsson, in a first half with no goal-scoring action but no out-and-out effort.

Sinisterra and Robin Koch as well as Villa’s Leon Bailey received yellow cards in the second half.

Goalscoring opportunities were rare in the first half. Meslier held off shots from Watkins and Coutinho and John McGinn’s 25-yard effort was deflected wide.

The best move before the break belonged to Leeds and ended with a flashing Sinistera cross that eluded everyone at the edge of the penalty area.

Leeds were down to 10 men three minutes after the restart.

When Douglas Luiz tried to play a quick free-kick, the ball hit Sinistera’s outstretched leg and Attwell booked the striker a second time for not backing up.

As the Leeds fans unloaded their fury on Attwell, Villa threatened to take an early lead, hitting a post through Coutinho’s volley before Watkins headed in the rebound.

Leeds were in danger of imploding when defender Koch took out McGinn and the German was grateful he just spoke to Attwell.

The home side dispatched Patrick Bamford and Luke Ayling with just over 20 minutes to go and their fresh legs gave Leeds a boost as Villa probed the breakthrough.

Watkins was denied by the pressed Meslier in the closing stages and at the other end McGinn produced a brilliant last-minute tackle on Leeds substitute Mateusz Klich after Bamford galloped into the box.

The home fans let out a huge roar at the final whistle after their team hung on, with resounding chants of “you’re not fit to referee” directed at Attwell.