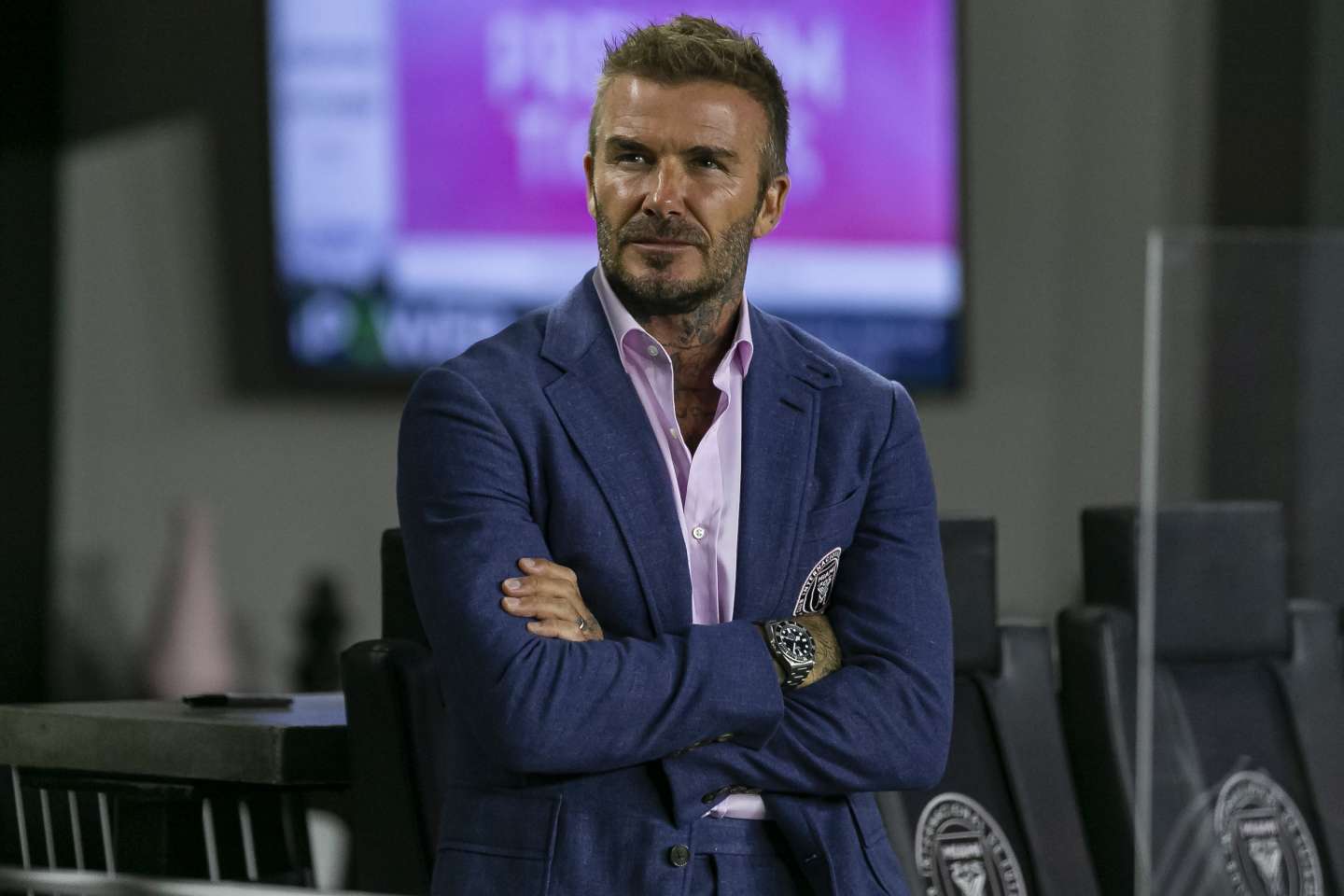 One of the biggest names in world football, David Beckham, has become a global icon. This British footballer has left his mark internationally. He is not only an accomplished footballer but he is also known for his devastating good looks, generosity and acting skills. The Beckhams have also become a household name in the fashion and lifestyle world. They are sought after by many stylists and designers when it comes to modeling or brand promotion. However, the international star has recently been caught up in a controversy. So let’s take a look at all the details about Beckham and the controversy he’s been embroiled in.

You may be wondering why all of a sudden there is talk about the sexual orientation of this famous footballer. Well, no, David Beckham hasn’t made any announcements about his being gay, or he’s come out of the closet. David Beckham is married to his beautiful wife, Victoria Adams, and the couple have four children together. Brooklyn Joseph, Romeo James, Cruz David and his daughter Harper Seven are the children of David and Victoria Beckham. Beckham and Victoria met when she attended a Manchester United game.

Victoria Adams herself is very accomplished and was once a member of the hit pop music group Spice Girls. She used the stage name “Posh Spice”. Both were at the height of their careers and already big teenage icons. The David-Victoria relationship has garnered a lot of media attention and has been cherished around the world. Without a doubt, they became the power couple at the time and eventually got married in 1999 at Luttrellstown Castle in Ireland. So there is no doubt that David Beckham is straight.

So why is this question asked? Well, David Beckham is known for his outspoken support for the LGBTQ community. He has also worked with gay magazines like Attitude and often prefers giving interviews and doing photoshoots with magazines and publications that support the rainbow community. David has shown his support to his gay fans and proudly displays his title of “gay icon” awarded to him by the homosexual community.

Although Beckham is such a generous supporter of the LGBTQ community, he himself is not gay. He has also donated large sums of money to help provide support for community betterment. However, his immense support is now in question due to his involvement in the Qatar World Cup. So what is it? We’ll take a look.

David Beckham and the Qatar Controversy

In the wake of the 2022 FIFA World Cup, which will take place this year in Qatar, David Beckham has become their official ambassador. However, there are serious homophobic laws prevailing in Qatar. Homosexuality is a punishable offense in Qatar that often includes death. So if you are gay in Qatar, you will most likely die. According to Human Rights Watch (HRW), a non-profit organization, the condition of homosexuals in Qatar is very bad. They report that homosexuals must endure alleged cases of beatings and sexual harassment. Transgender women are also forced to attend conversion therapy sessions at health centers. Keeping all these reports in mind, many Beckham fans criticized him for being the Qatar 2022 World Cup ambassador. British comedian Joe Lycett pointed the finger at Beckham and Qatar.

According to him, by being Qatar’s World Cup Ambassador, David also supports Qatar’s homophobic laws. Lycett went on to say that Beckham’s image as a gay icon is also being shredded due to his involvement with Qatar. Beckham, however, did not comment on this. Beckham, on several occasions, has said that he positively supports the growth of football. So, many of his fans are very disappointed with his involvement with Qatar. Lycett, who identifies as gay, also pointed out that Beckham changed his beliefs due to the £10million bond he signed with Qatar and the FIFA World Cup.

What does David Beckham say?

With all of this controversy and accusations, Beckham chose to remain silent. He has made no statement about his involvement with Qatar. David has also not made a statement about his departure from this agreement. With the FIFA World Cup just months away from the start, fans are very confused as to what Beckham plans to do. There is no doubt that this move by Beckham will definitely hurt his popularity as many of his fans are against it.

Who is David Beckham?

There are probably very few people who have not heard of David Beckham. He is known not only as a legendary footballer but also as a stunning role model. Beckham is also the current chairman and co-owner of Inter Miami CF and co-owner of Salford City. He won league titles in countries like England, Spain, USA and France. This makes him the first British footballer to win this title. Beckham is also known for appearing in several television and film roles.

He is also a highly sought-after model and fashion icon. Although Beckham has not appeared in any films as a lead, he has done a few cameo roles and has been involved in promoting several films and series. He appeared in Goal II: Living the Dream and also in Goal III. He can also be seen in The Man from UNCLE and King Arthur: Legend of the Sword. Beckham is also a staunch monarchist and made headlines when he stood in line for thirteen hours outside Westminster Hall to pay his respects to the late Queen Elizabeth II for the last time. He refused to walk past even if he had the chance and, like any other citizen, stood in line to pay his respects to the beloved late Queen. Let’s take a closer look at David Beckham’s career.

From the age of 17, David got into football with Manchester United. While playing for the team, David won the Premier League title six times, the FA Cup twice and the UEFA Champions League. Following this, David left the club to join Real Madrid. Beckham has become the first British footballer to play 100 UEFA Champions League games. Beckham is considered one of the greatest free-kick defenders of all time. His huge range of passing, vision, crossing ability and bending free kicks have helped his teammates score a goal on numerous occasions.

Thus, Beckham’s abilities have made him an excellent right winger and one of the best of his generation. He also left his mark on international football when he made his debut in 1996 aged twenty-one. Beckham captained the England team for six years and appeared in three FIFA World Cups and two UEFA European Championship tournaments. After a long footballing career, Beckham retired in 2013. Throughout his footballing career, Beckham has won numerous awards and been listed in several prestigious lists. In 1999, Beckham became the Ballon d’Or runner-up, followed by a two-time FIFA World Player of the Year runner-up. In 2004, he received the highest level of honor when Pelé himself named him in the FIFA 100 list of the world’s greatest living players.

You can also find Beckham in the English Football Hall of Fame, where his name was included in 2008, and the Premier League Hall of Fame in 2021. He has received numerous awards including Player of the Year in England in 2003, BBC Sports Personality of the Year in 2001, BBC Sports Personality of the Year Lifetime Achievement Award and Real Madrid Player of the Year. He was also awarded Britain’s Greatest Ambassador and Officer of the Order of the British Empire awards by Queen Elizabeth II in 2003. Currently, David Beckham is a global football ambassador.

He has undoubtedly made a name for himself in the world of football, but do you know that David Beckham is a very generous philanthropist? Beckham became a UNICEF Ambassador early in his career. He is also a Goodwill Ambassador with a particular focus on UNICEF’s Sports for Development programme. Not only that, but Beckham is also a founding member of the Malaria No More UK Leadership Council. Along with Andy Murray, he started the charity in 2009. He has also worked tirelessly to support children with cancer. Beckham is also openly supportive of the LGBTQ community and has supported many of his gay fans as well.

He generously donates money to charities for the development and protection of the LGBTQ community, cancer foundations, and for feeding malnourished and underdeveloped children. He is also one of fifty celebrities to have created a Paddington Bear which was in several locations around London. The money from the auction of these statues was donated to the National Society for the Prevention of Cruelty to Children (NSPCC).

Anna Kendrick net worth: You’d be surprised to know