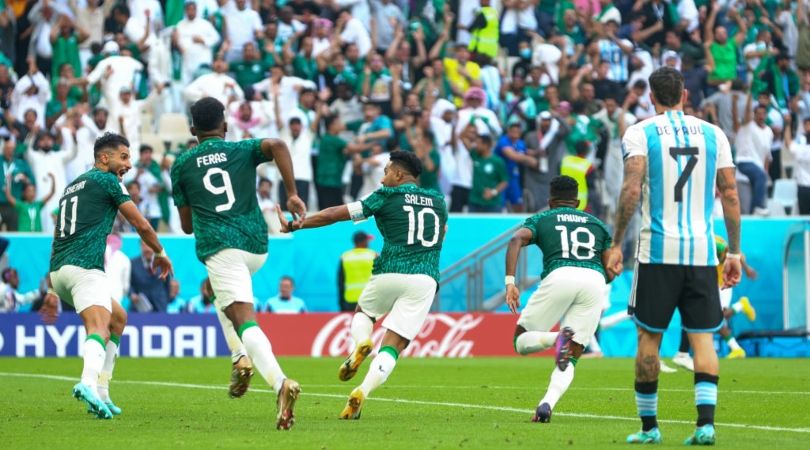 Saudi Arabia’s 2-1 victory over Argentina in Group C of the 2022 World Cup was considered the most unlikely victory in a World Cup football match in the history of the tournament, the Asian nation only having an 8.7% chance of beating the South American team. .

The data, released by entertainment metadata company Gracenote – which is owned by Nielsen – used a proprietary football ranking system to identify the most shocking wins throughout the World Cup’s existence.

Gracenote’s football rankings use team strength ratings to estimate the probability of a win or draw for each team in the World Cup. Matches won in regulation time by the underdog with the smallest percentage chance of winning, according to these estimates, are identified as the biggest upsets.

As Gracenote describes it: “Whenever two teams play each other, one earns points over the other based on the result, winning margin, who is at home, and the relative strength of the two teams playing. We also weight the number of points that change hands by the importance of the competition, so World Cups and Continental Championships are the most important and friendlies the least.

“So, for example, if Brazil (ranked number one) wins a friendly game on neutral ground against Costa Rica, 30th, 1-0, Brazil will improve their rating by relatively few points, because this result is more or less If, however, Germany beats Brazil 7-1 in a World Cup in Brazil, Germany’s rating will improve significantly at the expense of Brazil’s because both are strong teams and the end result, as well as the margin of victory, is somewhat surprising.”

Therefore, Saudi Arabia had a very small chance of beating Argentina, but they beat them. Saleh Alshehri and Salem Aldawsari scored in the second half to give Saudi Arabia the win, after Lionel Messi led Argentina 1-0 in the first half.

Switzerland’s 1-0 win over Spain in the 2010 World Cup is also among the list of most shocking World Cup wins. Spain managed to recover from the loss and become the first nation to lose their first World Cup game and go on to win the tournament as a result.

Ghana’s victory over the Czech Republic in 2006 is perhaps surprising. The African nation had just a 13.9 per cent chance of winning, with this tournament in Germany being their first World Cup appearance. Uruguay beating Brazil and Wales beating Hungary – both 2-1, in 1950 and 1958, respectively – also feature in the top ten of biggest upset wins.

Meanwhile, Germany’s failure to emerge from the group stage for the first time since 1938 at the 2018 tournament came as a major shock, not least because of their 2-0 loss to South Korea. However, one of the most iconic victories is Senegal’s 1-0 win over France in the 2002 World Cup.

France were defending champions and entered the tournament as one of the favourites, while Senegal were made up of relatively unknown players. Senegal managed to qualify for the quarter-finals, with France finishing last in the group.

Who is Morocco’s first-choice penalty taker?