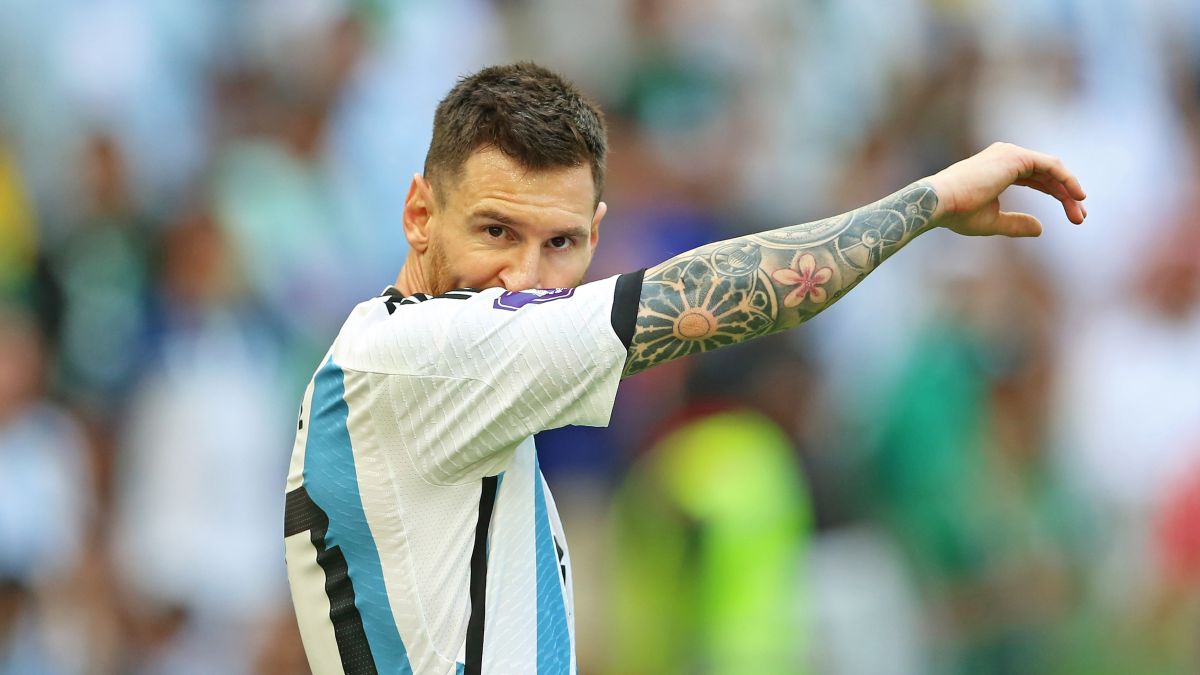 On this Tuesday noon, there was little doubt that most of the spectators had come to see. Messi-mania had indeed arrived in Qatar.

Argentinian fans dominated the scene outside the 88,966-seat stadium which will host the World Cup final next month – at least 20,000 appeared to have traveled from South America, where we can only assume shirt sales are doing a roaring trade. Most had Leo Messi’s name slapped on their backs for good measure – FFT had (vaguely) around 782 bearing his name, and three who liked to be rebellious – one went for Angel Di Maria, one for Leandro Paredes and one went full doghouse, opting for a goalie jersey in the name of Emiliano Martinez. Beat that – maybe it was his brother or something.

It wasn’t just the Argentinians who supported the Albiceleste either: a large part of the local migrant population had decided to join the party. How best to illustrate this? They of course bought themselves Argentine “Messi 10” jerseys.

Even the few spectators outside the pitch with no obvious Messi merchandise were eager to see him. “I also saw him in a friendly game in Abu Dhabi last week,” said a Canadian from Winnipeg, mainly here to cheer on his own national team in their first World Cup since 1986. “The stadium n “It wasn’t full for that game – it was mostly Argentinian fans, and even the people from the United Arab Emirates were Messi fans. Every time he got the ball, they were cheering.”

Lusail is an affluent new town on the outskirts of Doha, with wide boulevards – much like a Qatari Milton Keynes, except with fewer roundabouts and more random sculptures of flying whales. No, we don’t know why either.

Inside the arena, the Argentine shirts once again dominated, with their fans filling one end of the field. At the other end, a significant number of Saudi travelers – possibly more than 10,000 – were packed, having made the short trip across the border.
All it took was the mere mention of Messi’s name on the pre-match PA system for the stadium to erupt into a cacophony of noise – cheers for the most part, jeers from the Saudis, aware of the threat he was likely to represent today. Around 80% of the photographers lined up for the anthems from the Argentinian side of the pitch, almost as if they intended to take a photo of a specific person – they seemed less concerned with the photos of the Saudi team.

Like England’s game against Iran yesterday, the stadium wasn’t quite full, despite the officially announced crowd of 88,012, and despite the presence of Messi – a presence that almost turned into a goal within 90 seconds of kick-off, when his shot was saved. by Saudi goalkeeper Mohammed Al Owais.

Within 10 minutes he scored his goal – coldly sending the goalkeeper the wrong way from the penalty spot after a foul on Leandro Paredes, his seventh career World Cup goal.

LIONEL MESSI HAS ARRIVED! 🇦🇷🙌Argentinian number 10 scores his first goal of the 2022 World Cup from the penalty spot in 10 minutes!!#ITVFootball | #FIFAWorldCup pic.twitter.com/eUxnno9m7vNovember 22, 2022

The Argentina fans were bouncing back, the game seemed firmly in their control, and the game seemed over when Al Owais made the mistake of stepping back and allowing Messi to rush a loose ball, as the PSG man headed home him to make it 2-0. Or so he thought: seconds later he was disallowed for offside by the slimmest of margins. Saudi fans were relieved.

Still, every chance lay with Argentina, as they smashed the Saudi press and exploited their high defensive line to send players in goal far too often for the Asian side’s liking. Twice more, however, they had goals disallowed for offside – for Lautaro Martinez each time.

After Iran’s heavy loss to England, some feared Argentina would pick up six or seven in this match – before the break they looked like they could rack up that many in goals disallowed alone.

Then, within three minutes of the start of the second half, everything changed, both on and off the pitch, when Saleh Al Shehri slipped home an equalizer that had previously shown no sign to come. Suddenly, the Argentinian end of the stadium was silent and the Saudis leapt from their seats, waving flags of joy. Momentum had changed in an instant.

When the Saudis poured in again, their fans screamed in anticipation and the Argentina defense panicked remarkably easily – failing to clear, until the ball found its way to Salem Al Dawsari, who quickly provided that which will surely be one of the most incredible moments of this tournament. , finding the top corner from the edge of the box, before stringing Lomana LuaLua on with his acrobatic celebration.

Out of nowhere, an Argentinian team that hadn’t lost in 36 games was behind – Saudi fans couldn’t quite believe what they were seeing. In the halfway line, Messi stood with his hands on his hips, looking like he couldn’t believe it either. A desperate fan walked past us in the stand, wearing a Barcelona shirt with Messi’s name on it. Today wasn’t supposed to be like this.

Messi has never been a screamer and howler when his teams face adversity – Cristiano Ronaldo, he is not. All he could muster here was a brief shot of encouragement to his teammates, but the body language spoke only of desperation, of a 35-year-old man who knows next month is his last chance to achieve his greatest big dream and win the World Cup.

Still, he provided some quality moments – a saved header and a smart pass that almost led to a golden chance, but a free kick he could have imagined going over the bar, and bit by bit the game escaped him. At that moment, all he could do was stand still, gaze skyward, and then offer himself a nudge, delivered so timidly that it was clear he was beginning to doubt that this game is salvageable.

When he fell deep in a frustrated attempt to launch an attack himself, he was quickly tackled, to roars of delight from the increasingly excited Saudis. Soon their supporters were even thundering – bringing back bad memories for Messi of Argentina’s draw against Iceland in the 2018 World Cup opener, when he missed a penalty.

It would prove even worse for the Albiceleste – an equalizer never came, setting off scenes of blissful celebration at one end of the stadium at the full-time whistle, as the Saudi substitutes raced onto the pitch as though they had just won the tournament itself.

It’s not the end for Messi – Argentina reached the final after a shock loss to Cameroon in their Italia 90 opener, and Spain won the 2010 tournament despite losing in his first game against Switzerland.

Lionel Scaloni’s men still have the talent to turn the tide, break through their group and progress from there, but things won’t be easy now – games against Mexico and Poland won’t be easy.

On that remarkable afternoon in Qatar, Messi-mania came to a brief halt. The thousands of fans wearing shirts bearing his name returned to the subway station inconsolable, hoping for better days to come.

Who are the BBC commentators for Mexico v Poland at the World Cup 2022?

What do World Cup captains swap at the beginning of a match?