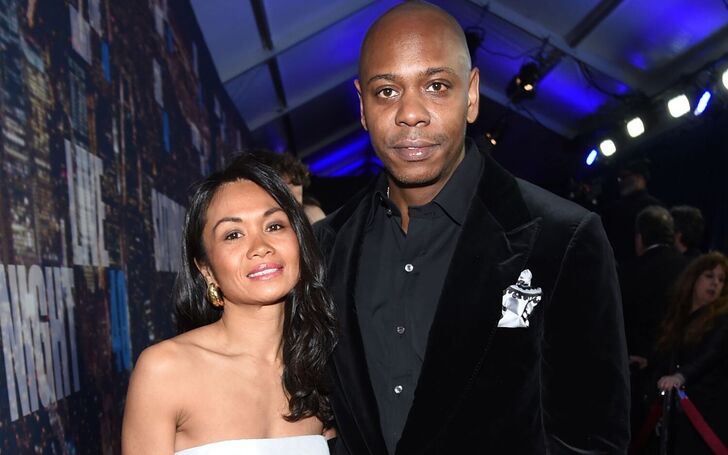 Elaine Chappelle is the famous wife of comic book legend, Dave Chappelle. Dave is a well-known American comedian and actor. His birth name is David Khari Webber Chappelle. He is best known for his satirical sketch comedy series “Chappelle’s Show,” which he starred in and dropped mid-production during its third season.

The couple have been together for more than two decades. Together they have three children and Elaine takes care of the family. She has supported her husband from the very beginning. Dave and Elaine prefer to stay away from the media, so they moved back to Ohio, a less populated place, just the way they wanted.

Elaine Chappelle was born on August 31, 1974 to Filipino parents. However, her parents moved to America, so she grew up in Brooklyn. Her maiden name is Elaine Mendoza Erfe. She is 48 at the time of this writing.

Being a very private person, Elaine did not reveal any details about her previous education, parents or siblings.

Elaine loved cooking from an early age. Later in her life, she also studied cooking and wanted to become a professional chef. But, her plans changed after meeting the comedian.

he couple met more than 20 years earlier when she was only in her twenties. The couple soon began dating. Then, in 2001, they decided to take their relationship to the next level. Subsequently, Elaine interrupted her plans to become a chef and decided to become a housewife.

She rarely appears in interviews or in public with Dave, and Dave also rarely talks about his wife; it’s almost too negative. Also, his Instagram is kept private. Only her approximately 700 subscribers know what she shared there.

The couple first met in Brooklyn, New York in the 1990s. At the time, Dave was still struggling, so there wasn’t much talk about their love life.

However, the unique couple have yet to reveal any details about their first steps in dating. They did not reveal the date of their first meeting, nor the exact place.

We only learned that the couple took a step forward in their relationship and got married in 2001, but again they didn’t reveal any details about their wedding ceremony. They have been married for over two decades and live privately in Ohio.

Moreover, they are the parents of three beautiful children, two sons, Sulayman and Ibrahim, and a daughter, Sanaa.

In an interview with The AV Club, Dave said having his first son was “the best thing that ever happened to him”.

Elaine Chappelle lives with her husband far from the Hollywood buzz

The Chappelles live on their 65-acre farm in Yellow Springs, Ohio, which is approximately 20 miles from the Dayton metro area. In 2006, the couple moved to Ohio to live a quiet life away from the spotlight, media and cameras. The population of Ohio is approximately 40,000 people.

At the time, while moving to Ohio, Chappelle said, “I was the hottest star on cable, and now I’m just a guy from Yellow Springs. Turns out you don’t need $50 million to live in those areas. Just a nice smile and kindness about you guys, you are the best neighbors ever. That’s why I came back and that’s why I’m staying,” says Dave, who grew up in Yellow Springs and has returned to live quietly with his family.

Elaine was with Dave when he was poor

There is a saying that you can conquer the world if you have your best person behind you. Likewise, Elaine has always been Dave’s main source of support. She was with him back then, when he was struggling for his career and his purpose.

In other words, Elaine is the one who saw Dave grow from nothing to where he is today. Over the years, Dave also never missed an opportunity to praise his wife and comment on how she never failed to support him. Once, during an interview with Howard Stern, Chappelle said, “She was with me when I was poor.”

She rarely appears in interviews and the media

As previously reported, the famous wife is enjoying her private life away from the spotlight. Not only that, she rarely appears with her famous comedian husband, Dave. But Elaine accompanies the eminent comedian in his privileged moments.

Just like in 2014, she was there alongside her husband when he was named one of GQ’s Man of the Year. Elaine also accompanied Dave when he received the Mark Twain Prize for American Humor at the Kennedy Center in Washington, DC, in 2019. In a video from this ceremony, Elaine was seen recording the speech of Dave’s acceptance with a proud smile on his face.

Similarly, in January 2022, Elaine was also pictured with Dave with model Naomi Campbell at the Dior Homme show in Paris.

Elaine’s husband converted to Islam in 1991. Dave said in an interview that his conversion happened when he was just 17 years old. He was inspired to change his religion in a pizzeria. Moreover, his children also have Islamic names.

So this has many Chappelle fans wondering if his wife is also a Muslim?

No, Elaine is not Muslim. Elain is a Christian and has not converted to her husband’s Islamic faith.. Despite having very different views, the couple are in a very healthy and loving marriage.

Her husband turned down a $50 million deal

The comedy series “Chappelle’s Show” helped a lot to make him known as an actor. Between 2003 and 2004, the show became a hit. After the huge success of two seasons, Comedy Central offered Chappelle a $50 million contract for the third season.

However, the comic turned it down, but not directly. In 2006, he quit the third season midway through production, turning down a $50 million deal regardless of the contract.

After leaving the show, he fled to South Africa. People even thought that he might be on drugs or have a mental health issue that caused him to walk away from the show. In an interview with Conan O’Brien, Dave explained how his wife, Elaine, reacted to his decision. He said,

“My wife is still a little salty. She’s not mad at me, but don’t think you’re gonna give up $50 million and your wife’s gonna be cool with it.

Did her husband have an affair?

When you are living happily with your love life, it is normal to face issues that try to affect your relationship. The same thing happened to Dave and Elaine, a solid couple.

Azealia Banks, a rapper, once came online and accused Dave of having an affair with her, mentioning details of their intimate night together. On top of that, she openly threatened him, saying she would ruin his married life by publishing everything that happened between them.

In this regard, Dave neither denied nor confirmed the allegation Banks made against him.

Dave Chappelle once said in an interview that Eliane prioritizes her children and family over her dream of being a professional chef. According to him, Elaine does not practice it and has always been a housewife. Thus, focusing on her family, Elaine has no source of income. Although she may have assets in her name, she has not made them public.

Her husband, on the other hand, is a legendary comedian. As of 2022, Dave Chappelle has an estimated net worth of $60 million.

Elaine is 163cm tall and weighs around 55kg. She is a fair-skinned, black-haired, black-eyed Asian girl.

As previously reported, she has kept her account private and is only accessible to her approximately 7,000 followers. On the other hand, her famous husband, Dave Chappelle, has 2.9 million followers on Instagram under the username @davechappelle.

Elaine Chappelle also uses Twitter; she joined in January 2010. Her biography says, “I am 33 years old, live in New York and am a medical transcriptionist.” I am a pagan and have been for 20 years. “I have two Mainecoon kittens.”

Death of George Seitz – Cause and Date

Death of Francis Quarles – Cause and date